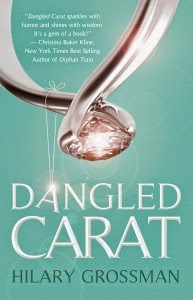 Hilary wants to be married, she wants to marry Marc who is a self-sufficient bachelor not looking to settle down with anyone, and on New Year’s Eve 2003, the great ultimatum is delivered without warning as Marc has a decision that will either make or break him and Hilary’s relationship.
With both Hilary and Marc’s family encouraging and prompting Marc to marry Hilary, Marc insists on taking everything slow and in his time before taking the big plunge into marriage. Hilary on the other hand says she will not be Marc’s ‘girlfriend’ forever and thinks it is time to commit to a more meaningful commitment after years of dating and eventually living together.
Hillary Grossman shares her intimate and personal story of the courtship between her and her husband and the events that led up to their surprise engagement and marriage with the help of loving family and longtime friends. In this day and age of short relationships leading to even shorter marriages, Marc chose to wait because of his fear of failure wanting to make sure his relationship with Hillary would pave the way to a good marriage.
As Hillary Grossman states, “This is a work of creative non-fiction” and shows that outside forces, the inner circle of family and friends, in a relationship sometimes works out for the best of all involved. I was entertained with the story but at times became frustrated with Hillary’s line of thought about being a ‘girlfriend’ for years with no marriage. Sometimes it may be best to wait and learn a person’s ways before jumping into a hurried decision to a commitment for life. I am recommending this novel to chick-lit, romance, and family relationship book lovers alike to learn one person’s point of view on love, friendship, and marriage.
I received this book free from CLP Blog Tours for an honest opinion in accordance with the Federal Trade Commission Guidelines.

thank you so much for joining the tour and reviewing!